One of the hardest things to do when you are overweight is lose weight.  The reason for being overweight does not matter, it could be due to a medical condition or a certain drug your may have been on at a younger age, or, it could be self-abuse?

It doesnt matter how it got there in the first place, it matters how you get it off… and KEEP it off!

It all means the same thing too, fat, overweight, obese, plump, chubby, dumpy, meaty, flabby, large and so forth… I’ve had them all over the years, I could write a small novel on some of the things I have been called. Has it bothered me… NO… the ignoramuses and uneducated among them just needed to get their facts straight before calling it as they saw it with their feeble minds.  For the intelligent ones, I just put it down to ignorance and a way it made them feel better about themselves and their own miserable existences.

However, the name calling can have major problems on many people, feeling bullied, hated, unattractive, useless etc. To those that feel this way just smile at them and say ‘thank you‘!? They will not know what to do next and it WILL make you FEEL BETTER – and mentally stimulating at the same time.

I am a fat bastard because of the medication I was put on as a child, to repair me, they thought it best to drug me with steroids, that just hid the ailments and banged the weight-on. When I was 7-years-old I was of the correct weight for my age, by the time I was 10-years-old, I had ballooned out. This contribution to my unwanted weight gain, and is a strong contributor to my love of natural remedies from mother nature and not the shit that is developed by wealthy lab rats.

For years, I struggled with diets and the addictions – now, I am not talking about drug addictions, I am talking about food addictions, crisps, chocolate, sweets. I couldn’t just have 1, 1 packet maybe, but never just 1, it was mental torture. You get ‘the taste’ and your brain is saying ‘more…more…more’.  The off-switch malfunctioned.

The forced-diets from the doctors in the 1990’s were the best….. starve the patient! You really think that is going to work with a 14-year-old kid and all his school friends are teasing him with their sweets and chocolates knowing full well that your will power was weak and you would give in to temptation. Then to visit the GP 3 weeks later for the dietitian to humiliate you for not losing any weight. You then go to college, its not so much the food that your addicted to, its the booze (and many other things), that would generally lead to the munchies and raiding the vending machines after a belly full of beer.

You finish your college courses 4 years later and reality really does hit when you have had 4 years and not really lost any weight – its not through lack of trying, it is all these fad diets that may last 2-3 weeks and then fail and back to square one.

You want to do this on your own, you want to prove that you do have the willpower, you do have the mental control, you can do this. You seek help, but you are put on a waiting list. You join these ‘fat clubs’ and all they do is belittle their members… you know what I mean… the middle-aged busy-body fat club owner who wants you to ‘tell the group why you have put 1 pound on this week’ and shame you once you have give them your subscription fee.

Diabetes strikes when your in your mid-30’s… thats a shitter…. the symptoms are very scary, your vision goes crazy, you have an uncontrollable thirst which leads to numerous ‘comfort breaks’ every hour…  plus several other symptoms including fatigue, lack of patience. My worst experience was the thirst though, it was a painless aggressive torment, drinking pints of water and still feeling thirsty, not being able to pour the liquid down your neck fast enough and wanting more, more, more, more…. Then it was hit the toilets to get rid of some. Thirst is thirst when you consider drinking your own piss as it is hitting the toilet water – I mean WTAF!

I signed myself up to the gym within a week of getting my blood sugars under control and have been visiting 3-5 times per week ever since. The exercise helps mentally as well as physically but I was still struggling with losing the weight and keeping the weight off. I started to buy the slimming world meals from Iceland and watched portion control, so I thought I was doing everything I should be doing and then I would hit a wall and have a ‘treat’ at the weekend – this would consist of several bags of crisps and chocolate bars, washed down with a few bottles of beer. I would get these ‘breaks’ once a month or so, (this was my time of the month) and although it is good to have a treat, I would always go a treat too far!

This was definitely a control problem, I would tell myself no but everything else would say yes… the evil twisted bastards!

My greed pointed to one thing and one thing only. My Brain. Previous diets told me, I could eat this and eat that but never gave any constructive feedback, you know, like a kick in the bollocks. NO! Previous diets (and I tried several of them) did one thing… starve me till my next meal.

My brain was always telling me, you are hungry, go and eat something you fat lump. Come’on you greedy git, dont forget to shovel it down with a few bottles of beer.

My brain needed the whipping not my gut… and now……………. I am in control of my brain. I dont have the ‘munchies’ or the ‘lets have another treat’ anymore. Yes. I still have a treat but, it is A treat and not SEVERAL treats. And, I would rather my treat be a piece of fruit and occasionally a chocolate bar and this is because of one reason, I have learned to train my brain! 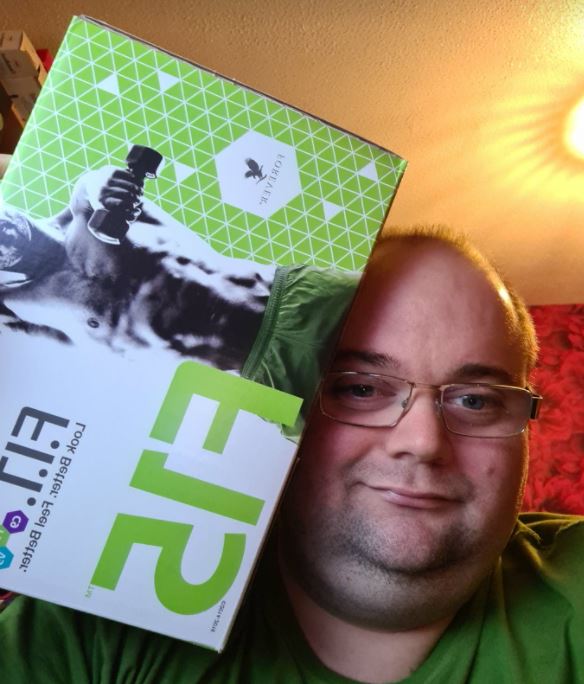 After completing the 15 days, I was able to continue on my own because I understood what I needed to do and trained my brain not starve my stomach.

Since the pandemic hit us, I was on furlough leave for 9 weeks and have been working from home prior and since. Temptation has been there all the time but I have NOT been tempted!

I revisited the F15 a couple of months ago – mainly to give myself a boost and I lost just under 1 stone and another 1.7 inches off my waist. Since completing the second course, I have lost a further 19 pounds on my own – easily. Still doing the same things, my brain controls what I put down my throat and my body takes me to the gym, and I still have the odd treat.

I have lost over 3 stone in the last 18 months, I have done this nice and slowly without rushing it off to put it back on again, and I plan to lose at least another 3 stone over the next 18 months. This I know I can do, and the reason for this, is being put on the right path with this scientifically produced weight management program.

I am happy to lose the weight slowly, because I am not putting it back on, I feel more energy, I am more positive and I can do more things both mentally and physically which I couldnt necessarily do 2 years ago.

I will be completing another F15 within the next couple of months because it gives me that boost and gives my brain that mental refresher.